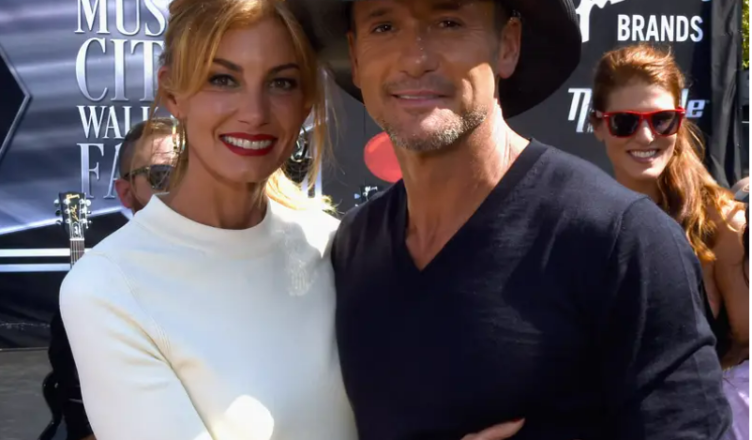 There are many relationships in the music industry, but few have lasted as long as Tim McGraw and Faith Hill.

They’ve been married for nearly 25 years and have worked on a few albums together.

The pair have three children and have even featured on television together.

McGraw and Hill met for the first time in February 1994. 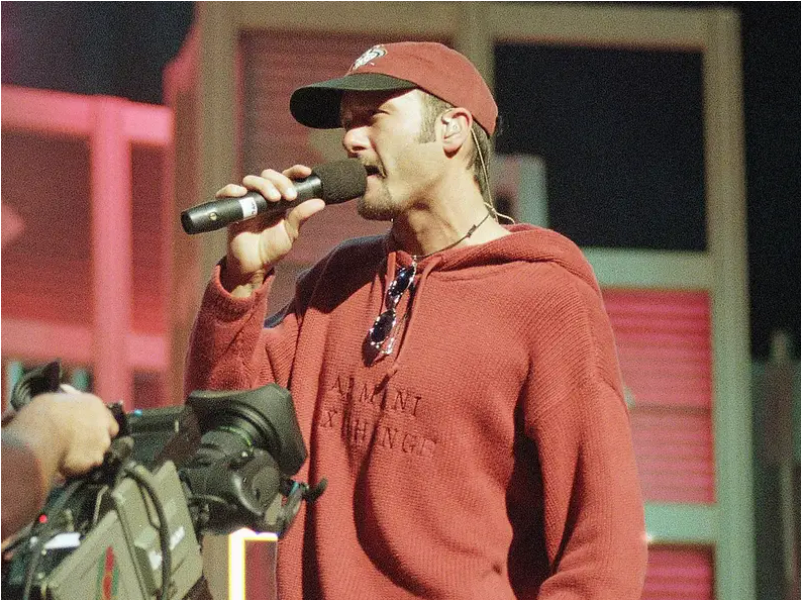 McGraw said in a 2006 broadcast of CNN’s «Larry King Live» that they first encountered each other in 1994 at the annual Country Radio Seminar in Nashville.

Hill and McGraw, both new to the music industry, participated in the seminar’s «New Faces» concert.

Although they claim an «immediate» connection, the two insist it was just a pleasant talk since Hill had recently divorced her husband, Daniel Hill, and McGraw was seeing Kristine Donahue.

They had a great synergy when performing together in 1996. 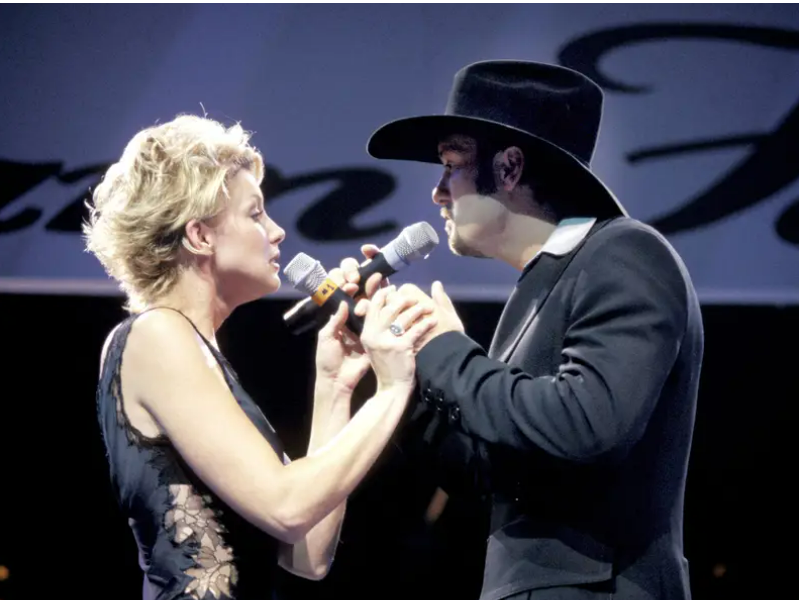 When Hill played for McGraw on his Spontaneous Combustion Tour, passions flared between the two vocalists.

While McGraw had just divorced from Kristine Donahue, Hill was engaged to music producer Scott Hicks at the time. Despite this, Hill said that she did not want to pass on McGraw and ended her relationship with Hicks.

«If anybody is going to condemn my reputation because I was engaged to someone and then left him for another person—’Oh, well, now she’s a sl.ut and a nasty person,'» she told People in 1998—I can’t handle that.» «However, I wasn’t going to let Tim slip through my fingers.» 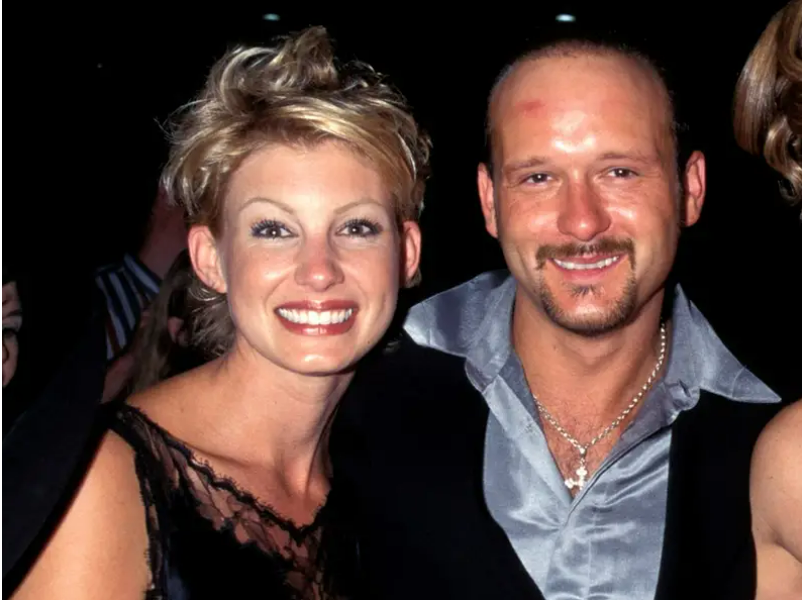 McGraw shared a video on Instagram in 2021 recounting how he made a proposal to Hill on the couple’s 25th anniversary.

McGraw recounted telling Hill in a trailer while preparing to go on stage at an outdoor music event that they should marry.

«‘You’re proposing to me to marry you at a country music event in a trailer house?'» she said. McGraw remembered. «And I responded, ‘Well, if you think about it, that’s quite apt.'»

McGraw said that he then went on stage to do his portion of the show, and when he went to the trailer, Hill had written in lipstick on a mirror, «Yes, I’m going to be your wife.» He said that they still had the mirror.

The singers made their first public appearance as a pair in 1996. 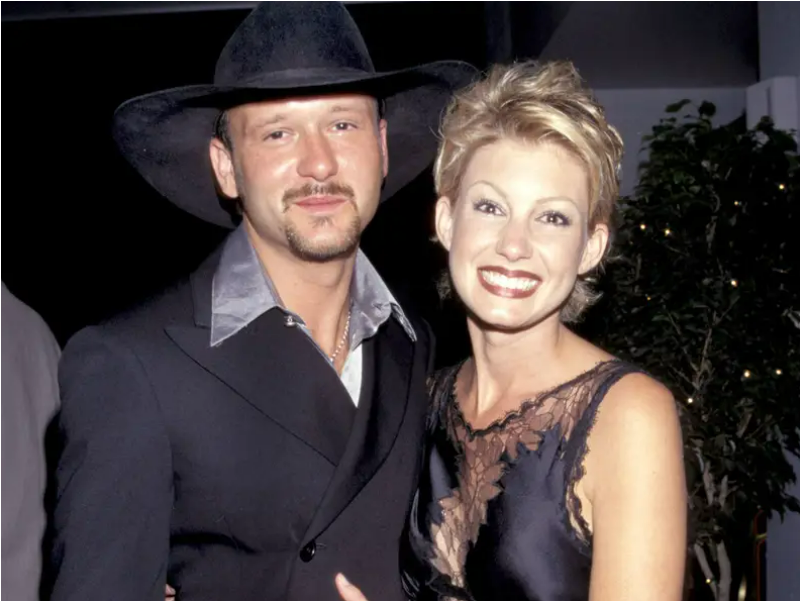 Just a month before their wedding, the pair made their first public appearance together at Andre Agassi’s Grand Slam for Children in Las Vegas.

They planned a secret wedding in October 1996. 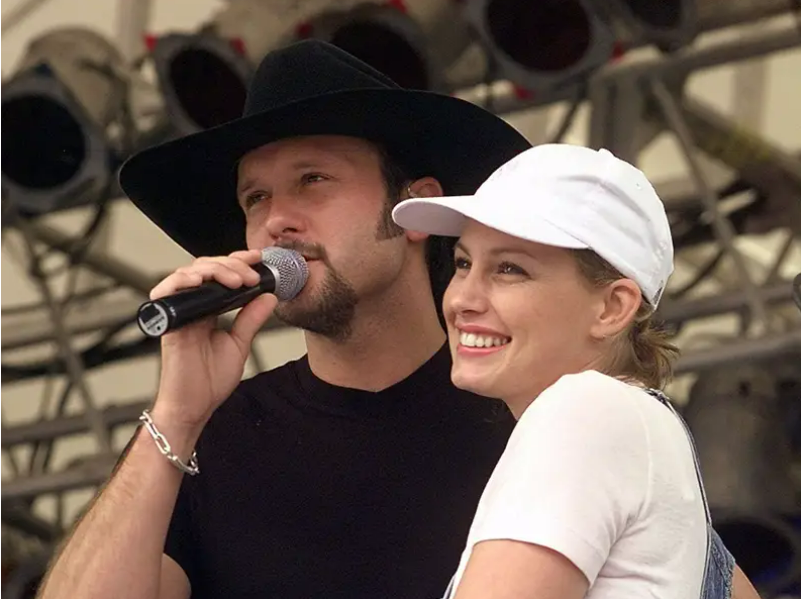 After just a short time together, Faith and McGraw exchanged their vows and became husband and wife.

McGraw said in an episode of «Live With Regis and Kelly»(2011that the couple had decided to invite their guests to a charity softball game in McGraw’s birthplace of Rayville, Louisiana, but instead they got married in front of all of their friends and family.

«My sisters were a bit disappointed because they wanted to dress up properly,» he added. «They just wanted to have fun.»

In May of 1997, the couple became parents for the first time. 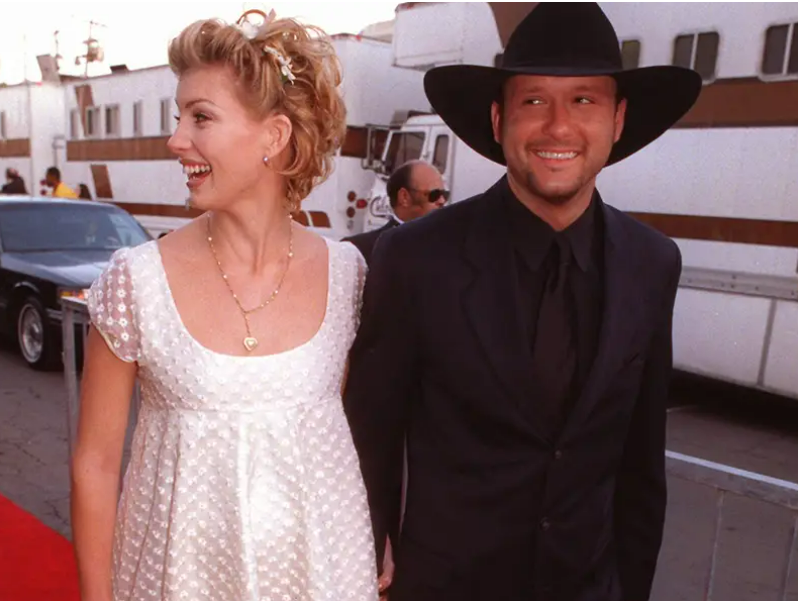 In 1997, May, the couple welcomed their first daughter, Gracie Katherine. The same year, the duo had their first hit together, which ultimately topped the charts. 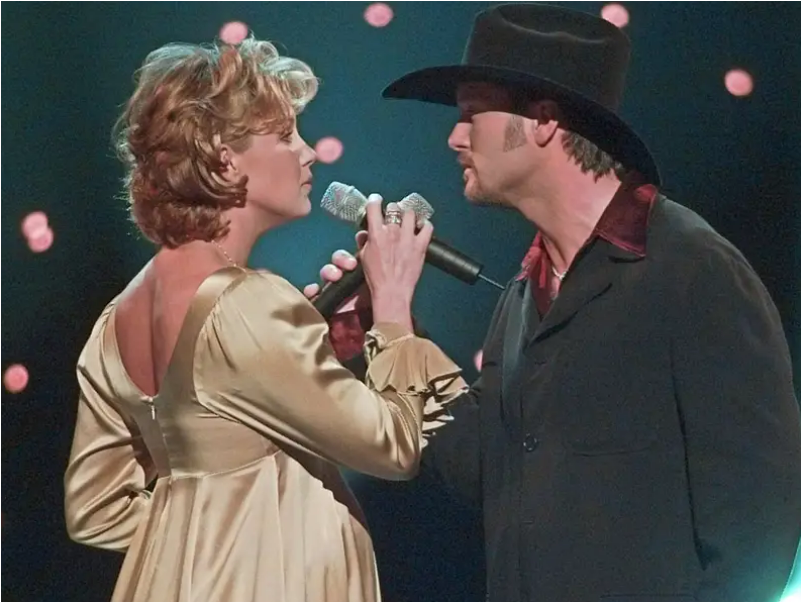 The pair also recorded their debut song together in May of that year, titled «It’s Your Love,» which was included on McGraw’s album titled «Everywhere.»

Both the song and the music video for it, which showed Hill in the last stages of her pregnancy, were very popular and made a lot of money.

The song earned awards for Single of the Year, Song of the Year, Video of the Year, and Top Vocal Event of the Year at the 1997 Academy of Country Music Awards. It also spent six weeks in a row at the top of Billboard’s Hot Country Songs chart. 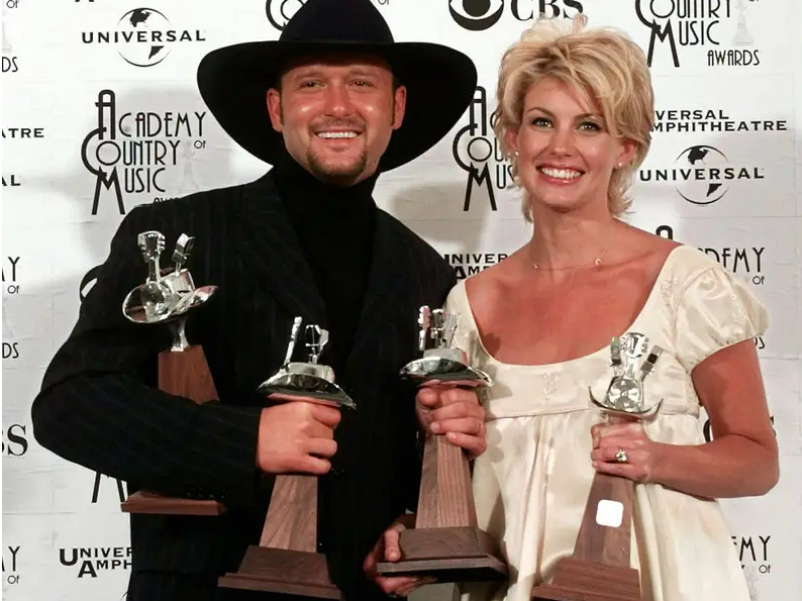 On August 12, 1998, McGraw and Hill were blessed with the arrival of their second child, Maggie Elizabeth.

In July of the year 2000, Hill and McGraw embarked on a joint tour. 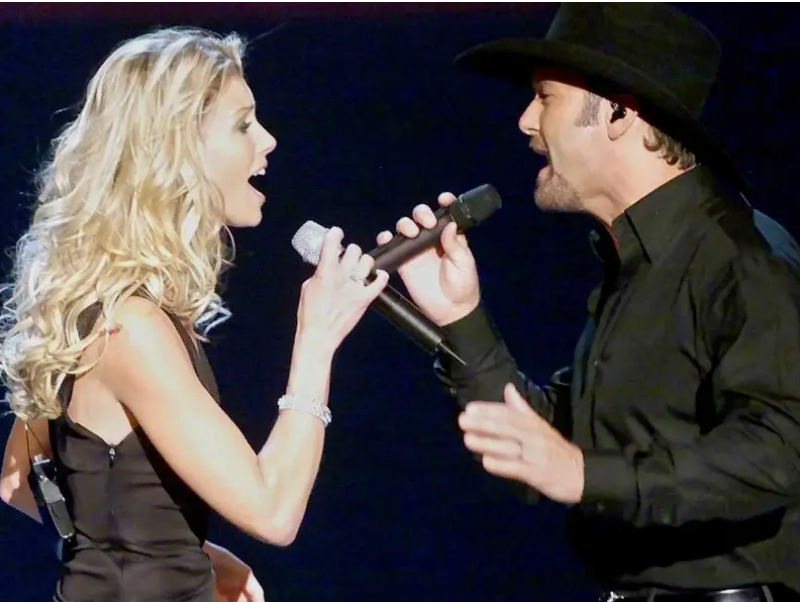 The two soulful singers, each of whom had achieved independent fame by the year 2000, collaborated on a tour under the name Soul2Soul. July of 2000 marked the beginning of the two individuals’ trek across the nation, which lasted until December of the same year.

Based on a statistic that was published in the Billboard Boxscore in 2006, the tour generated around $50 million in revenue and drew approximately 950,000 people to its 63 events, of which 60 were completely sold out.

December 2001 saw the arrival of the couple’s third daughter. 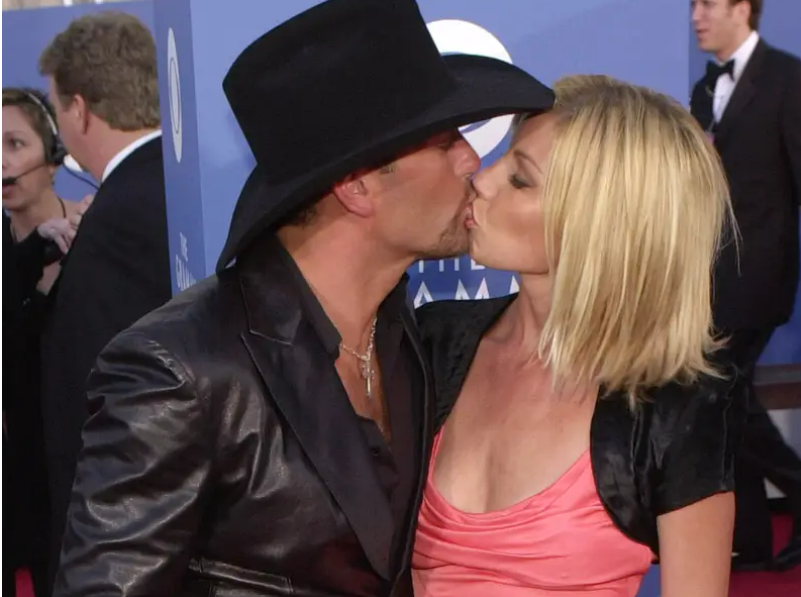 On December 6, 2001, not long after the conclusion of their Soul2Soul tour, the two artists became parents for the third and last time to a baby girl whom they named Audrey Caroline.

In April of 2006, the pair resumed their journey together on the road. 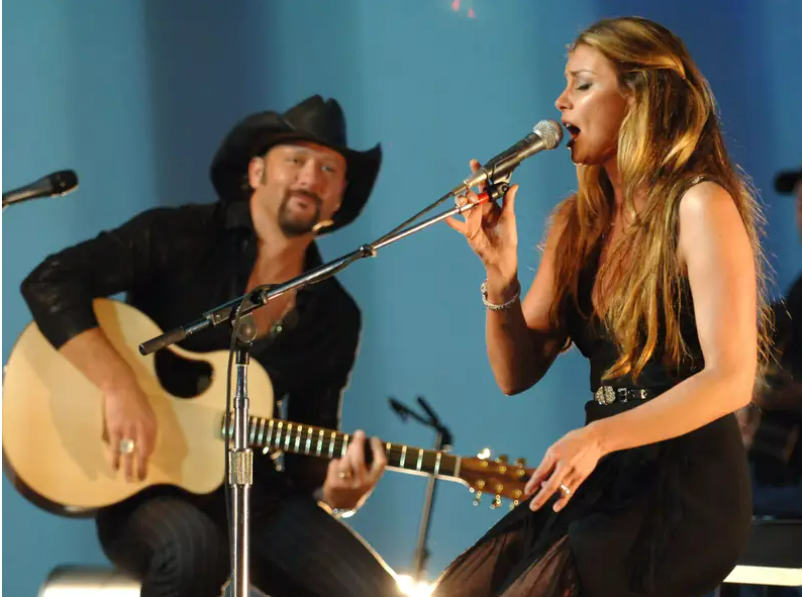 After the popularity of their first tour together, Hill and McGraw decided to go back on the road for their Soul2Soul II Tour. They both grabbed their guitars and headed out on the road.

In 2007, the Washington Post wrote that the Soul2Soul II tour was the most profitable tour in the history of country music up to that point.

In June of 2010, McGraw and Hill participated in a charity event together. 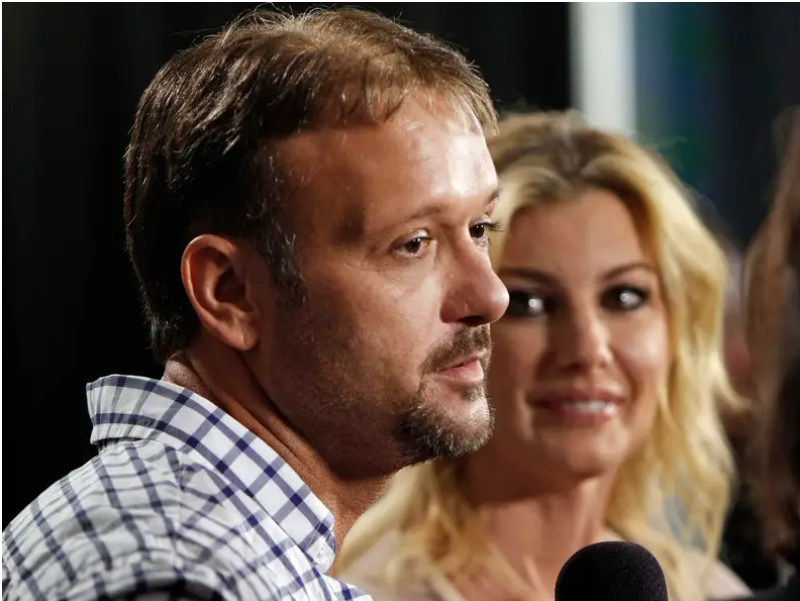 The pair hosted a charity performance called Nashville Rising, and the couple offered their musical abilities for the event. According to an article in Billboard from 2010, the charitable organization had the goal of raising $2 million to help flood victims in Tennessee.

Both McGraw and Hill gave performances during the event, during which they shared the stage with a number of other well-known artists.

In December of 2012, I found the singers and musicians performing in Las Vegas. 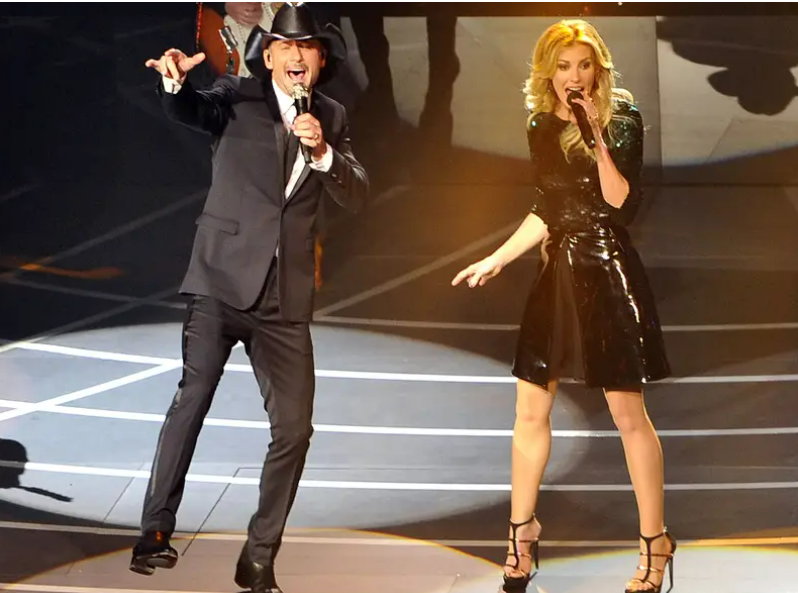 The married couple gave up performing on the road in favor of a 20-show residency at the Venetian in Las Vegas. This decision allowed them to settle down.

McGraw said in 2012 during a news conference that their family would be able to spend more time together thanks to the residence rather than time apart when traveling.

Country music musicians were honored with stars on the Music Row Walk in October of 2016. 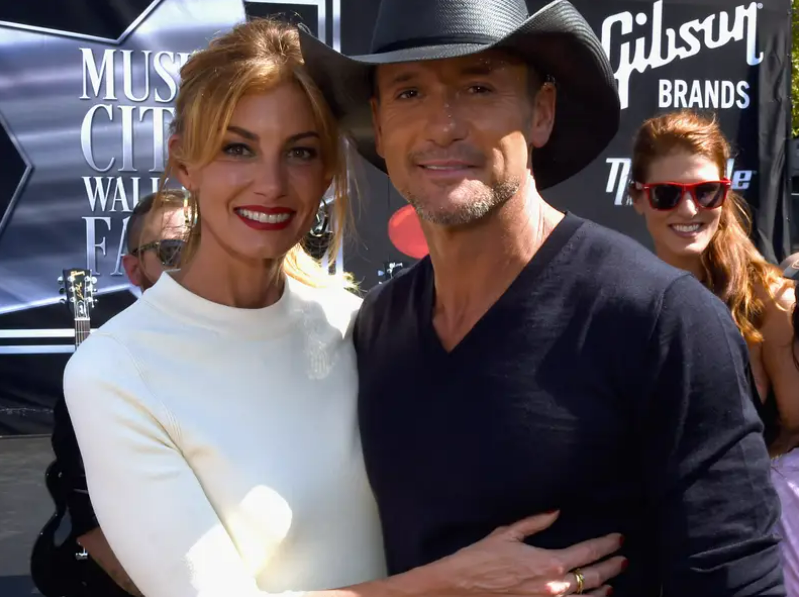 By 2016, they were well known and respected as members of the royal family.

They were each presented with a star on the Music Row Walk of Fame in Nashville’s Music Mile as a token of appreciation for the significant contributions they have made to the genre of country music and the city of Nashville. They now take their place alongside the likes of Dolly Parton, Keith Urban, and Kings of Leon.

During the same month, the happy couple celebrated their 20th wedding anniversary with family and friends. 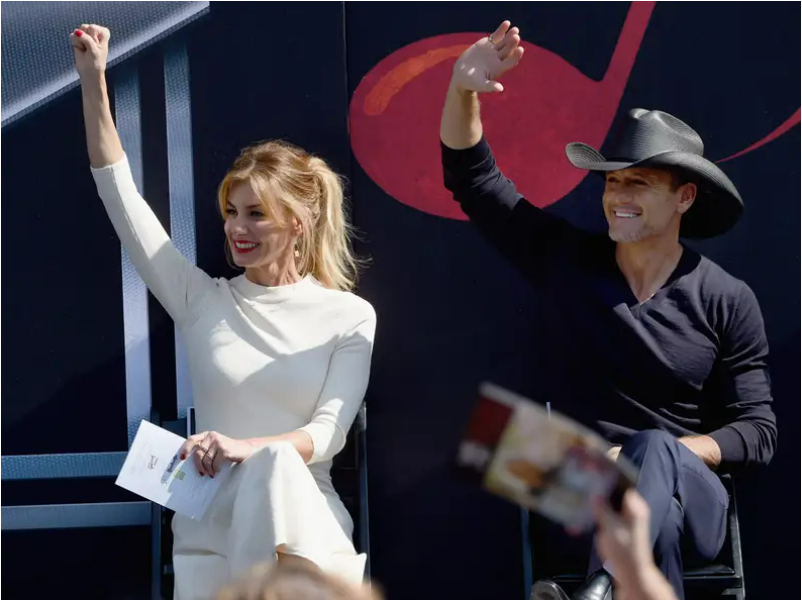 Hill claims that the couple celebrated their 20th wedding anniversary in a low-key manner because they made the conscious decision to do so.

In 2016, when Us Weekly inquired about the couple’s major upcoming activities, Hill responded by saying, «We are going to be in sweatpants, binge-watching TV.»

The two embarked on another tour together in April of 2017. 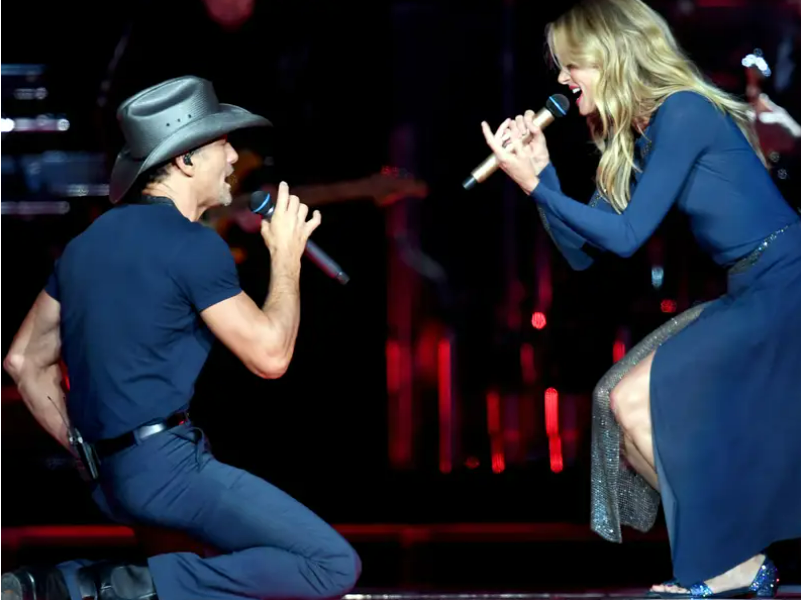 Another tour, this one called Soul2Soul: The World Tour, was the latest undertaking by the duo in their ongoing collaboration.

The two started their tour in April 2017, playing at a total of 80 locations that were completely sold out. Because their show was so well received, the two decided to keep it going until the summer of 2018.

The long-awaited duet album was finally issued by the pair in November of 2017. 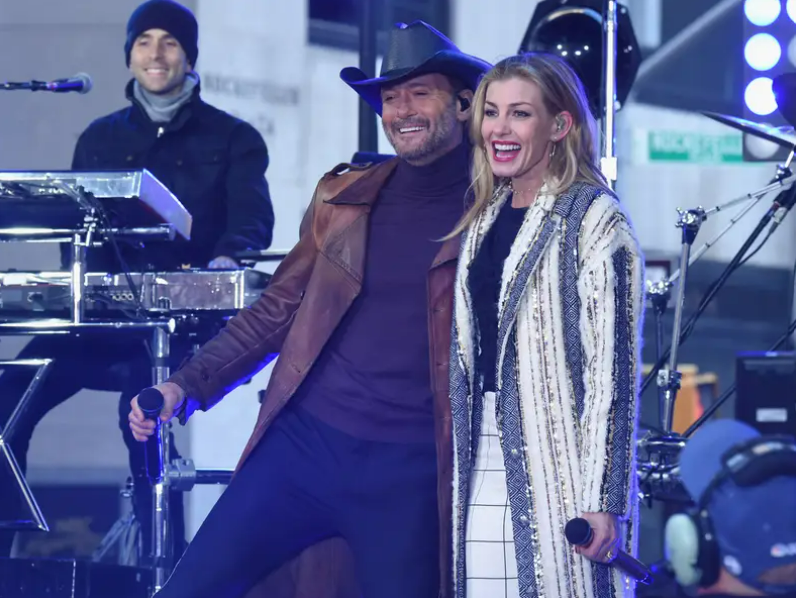 Following a number of years of playing together and contributing to one another’s albums, the two finally came together to record a duet album, which they titled «The Rest of Our Life.»

Nielsen Music announced in 2017 that the album made its debut at No. 1 on Billboard’s Top Country Records chart and sold 104,000 equivalent albums during its first week. The information was obtained from The Country Daily.

During the same month, a display honoring the pair was unveiled to the public. 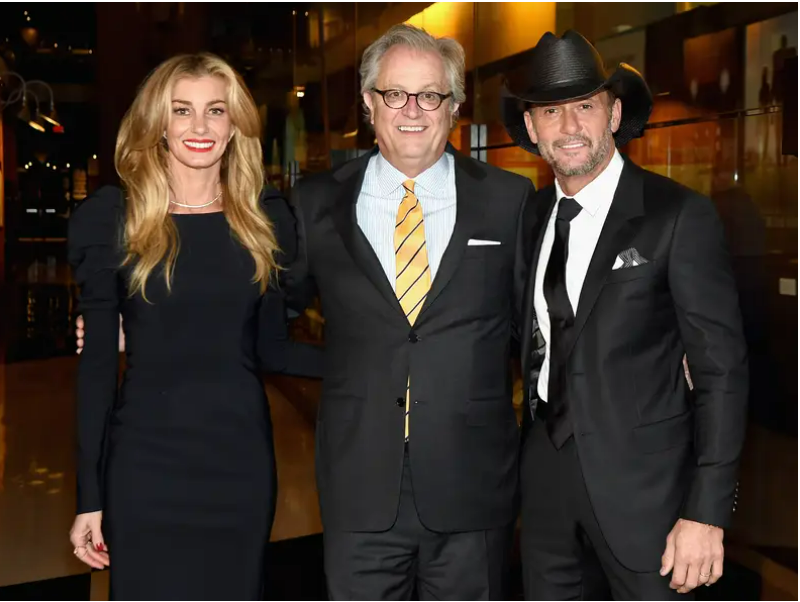 The Country Music Hall of Fame and Museum in Nashville, Tennessee, just inaugurated an exhibit that explores the careers of the two singers in conjunction with the release of their very first record, with both of them performing together as a duet.

This show, which was named «Tim McGraw and Faith Hill: Mississippi Woman, Louisiana Man,» examined the lives and careers of the two country music superstars.

The celebration of McGraw and Hill’s 23rd wedding anniversary took place in October of 2019. 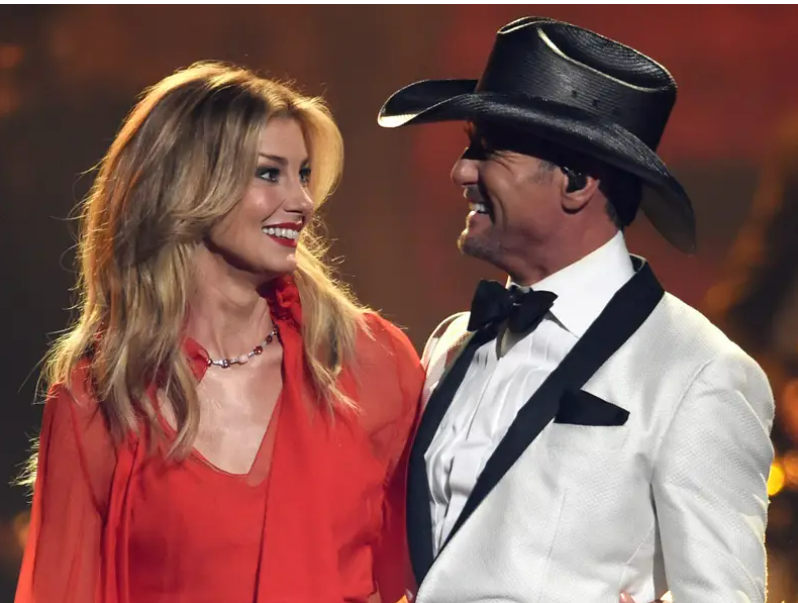 In 2019, McGraw discussed the pair’s anniversary celebration on «The Kelly Clarkson Show» on NBC. The couple have been married for 23 years.

November 2019: McGraw said in his book that Hill presented him with a choice between two options. 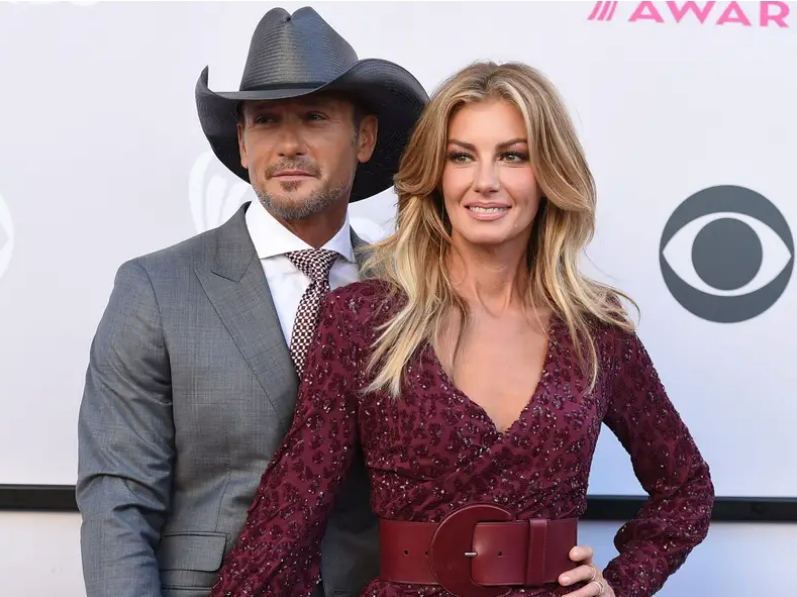 In the book «Grit & Grace: Train the Mind, Train the Body, Own Your Life,» which McGraw wrote, the author talks about McGraw’s life and health at different points in his career.

According to People, McGraw claimed in his book that Hill informed him early on in their marriage that he needed to choose between his partying lifestyle and his family. People stated that Hill made the statement. McGraw claims that his wife and daughter served as a wake-up call, and as a result, he made the decision to lead a better lifestyle.

September 2020: The pair discussed their policy on the exchange of gifts. 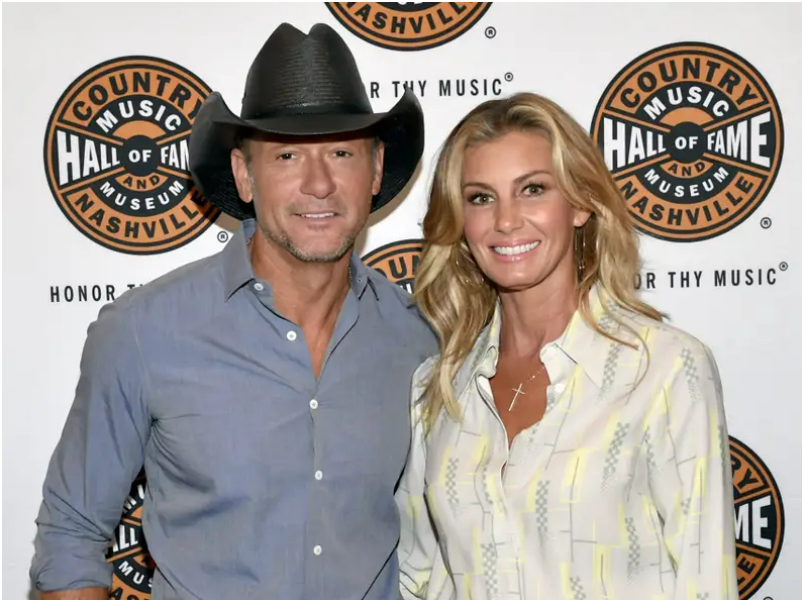 During an interview on «Jimmy Kimmel Live!» on ABC, McGraw revealed to the presenter that after 20 years of a happy marriage, he and Hill had resolved to give gifts that were not too extravagant.

In the year 2020, McGraw said on the program that the family had come to the conclusion «a couple of years ago that what we’re going to do is we’re just going to spend $100 apiece for Christmas or birthdays.» «That is to say, every once in a while, I’ll go over the line and do something very dumb. But for the most part, over the course of the last four or five years, we’ve attempted to limit the amount we spend on presents to about one hundred dollars apiece. 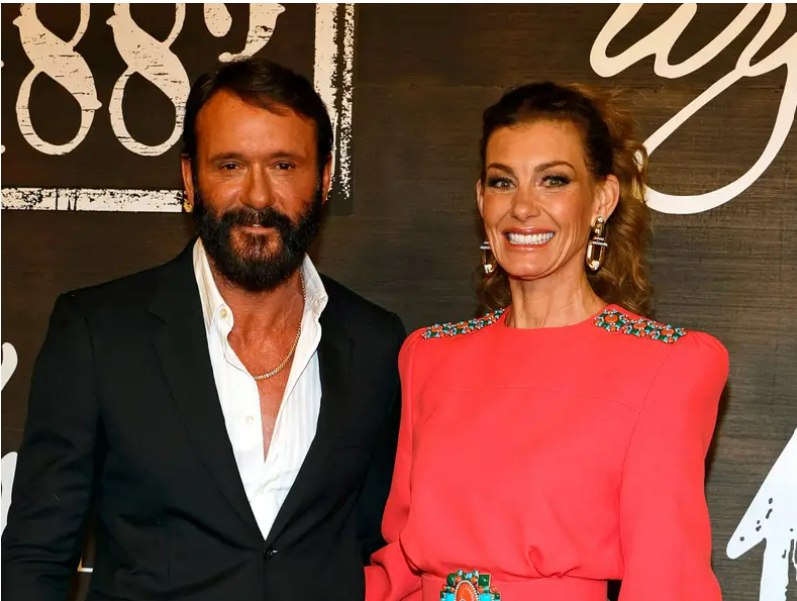 In 2021, McGraw and Hill were cast as James and Margaret Dutton on «1883,» a Paramount-made prequel to the TV show «Yellowstone» in which McGraw played James and Hill played Margaret.

In 2022, McGraw gave an interview to The Hollywood Reporter in which he said that «inherently, our connection and our chemistry and who we are together — it’s going to be there.» However, we were committed to maintaining a level of realism appropriate for those characters.

The duo has received acclaim ever since the first episode of «1883» aired for their performance as the original proprietors of the Montana ranch that was featured in the series.